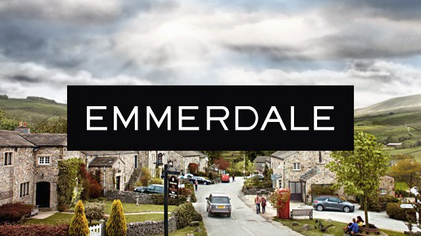 Friday! We made it to the end of the week. Let’s see how we close it out!

Happy Bank Holiday to the UK readers! Do you wish each other a happy bank holiday? Oh well, I will! *an awkward Ryan style thumbs up*

Aaron still plays with his ring finger *melts into a puddle*

That wedding ring was his touchstone. *melts further*

I think Megan is a good person just got caught up in revenge. It happens.

OH GOD. Not the Dingle Court! *I really want to see this*

Can there be a spin off called “Dingle Court” I’ll watch that in a heartbeat.

Tracy and Vanessa defending their dad is sweet to see. Lots of mini family moments today.

How does one pull off blue eyeshadow? Tracy does it well and I look like a smurf.

Megan is in love with Frank again but Frank…I think he is done with Megan. For now.

I love this little family too.

I love Dan’s daughter. She is me online. *wink*

I LOVE that John Cusack joke. *good one writers. That made me laugh*

Finally getting some dimension to the comic relief characters.

Awwww, they are cute. They are so screwed, aren’t they?!?

The Gym of Hell

I’m not a fan of fighting or boxing, so this is rough for me to watch.

I’m sorry, but Danny has been serving some weird looks since this storyline began. It’s like he is working through a list of looks. *random thoughts*

Seriously. His eyes are very blue this week. I’m distracted now. What is happening?

Could you be more obvious Jason? I can see the drug deal a mile away.

*snorts* Geez Adam. You suck. *I am still mad at him* *I may be enjoying Adam getting his ass kicked* *form a line if you want to fight me on this*

HATE JASON. SO MUCH.

This is all so plotty. They want Vadam back together for some reason. I wonder why?

Oh. Does Victoria, Adam, and Zak tell Robert? Like, ROBERT! Aaron is in trouble! Come on superhero Sugden! Let’s go save your boy.

FAITH! MY HEART. MY LOVE. I adore her. *VOTE FOR FAITH*

I think David and Tracy are starting to argue. *its starting*

Frank is done. SO Done. Don’t blame him either.

Eh, Zak. Adam is a better man than Jason but not the greatest. Let’s not go nuts show.

Victoria has a new baby to obsess over, and his name is Adam.

OK. PEOPLE. What do you all think is going on with Zak? He is everywhere lately. He is losing track of time. He is getting involved in weird plotlines and Dingle nonsense. Thoughts on what is up with Zak required!