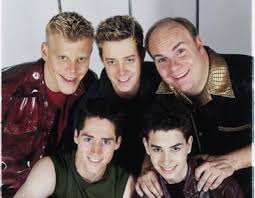 Welcome back to my favorite fake television band month! Not at all a mouthful at all! Anyway, what band is up next?

There is a formula. 2gether will solve this formula (calculus)

Back the late 90s-early 2000s there was a craze going around. Every country in the world was sending their best boy bands to compete in the competition called the teenage girl heart. The stadium where this battle occurred? MTV and TRL. Carson Daly has really come far. He is literally a host for a music show now. Yeah.

Anyway, yes. Back in the day, MTV was not full of New Yorkers in New Jersey or teens with kids. It had music and other music related programing. Man, those where the days. While that epic battle raged on in the real world there was a special band raising to the surface.

Nigel Dick, a famous music video director, with the help of MTV brought on a new band that would keep up with its real world counterparts. The spoof movie 2gether followed the rise of a fictional boy band that followed the formula that the real world used itself. The film followed heartthrob Jerry (Evan Farmer), rebel Mickey (Alex Solowitz), cute one QT (Michael Cuccione), shy one Chad (Noah Bastian) and the older brother type Doug (Kevin Farley) as they tried to dethrone the current boy band Whoa. They also had to battle Stuff Records and learn to trust their manager Bob Buss.

The movie premiered February 21, 2000 on MTV to success. The band released two albums that actually charted and they opened for Britney Spears. The Spinal Tap sarcasm hit the right spot and audiences wanted to see more. The band got their own television show following their lives after the movie. The band had charting hits from the movie and television show with U+ Me = Us (calculus), The Hardest Part of Breaking Up (Getting Back your Stuff) and Say it(Don’t Spray It).

The television show was cut short when member QT aka Michael Cuccione passed away ending the show and the bands run on MTV.

Recently, 2012 recently, the cast announced they pitched a reunion show to MTV. They wanted to play on my generations nostalgia for our youth and create a “Where are they Now” show. Nothing has come from that announcement but I would watch as long as they are tongue in cheek about what happened to the music industry since the boy band wars. Would it fit in today’s MTV though? That is the biggest question of all.

Remembering this band brings me back to my obsession with boy bands. In the year 2000, I was about thirteen years old. I was in the trenches of the boy band war. If you need to know, I started a Backstreet Boys fan and switched to NSYNC soon after. I blame Justin Timberlake and Lance Bass for that transition. I went where the cuter boys were. I was very simple-minded back then.

I remember watching this film and falling hard for it. I was their target audience and I ate it up to the point where I bought both albums the band made. I may have missed the sarcasm of the whole project but that I why I still love this band today. I watched the movie recently and it still holds up as a period piece. It is a wink at how the record company used the guys as much as the girls to sell their products. It is a good look at marketing in the 2000s.  It holds up for me.

I will not lie either. I still listen to the songs because they are funny and catchy. Compared to what is on the radio right now I would rather listen to 2gether. Also…kids…GET OFF MY LAWN! (Get it? I’m old.).

Stay tuned because tomorrow I look at their best moments from the movie and television series that made me truly fall for them. Until then, the random fake band love has ended for the day. Hope you enjoyed.